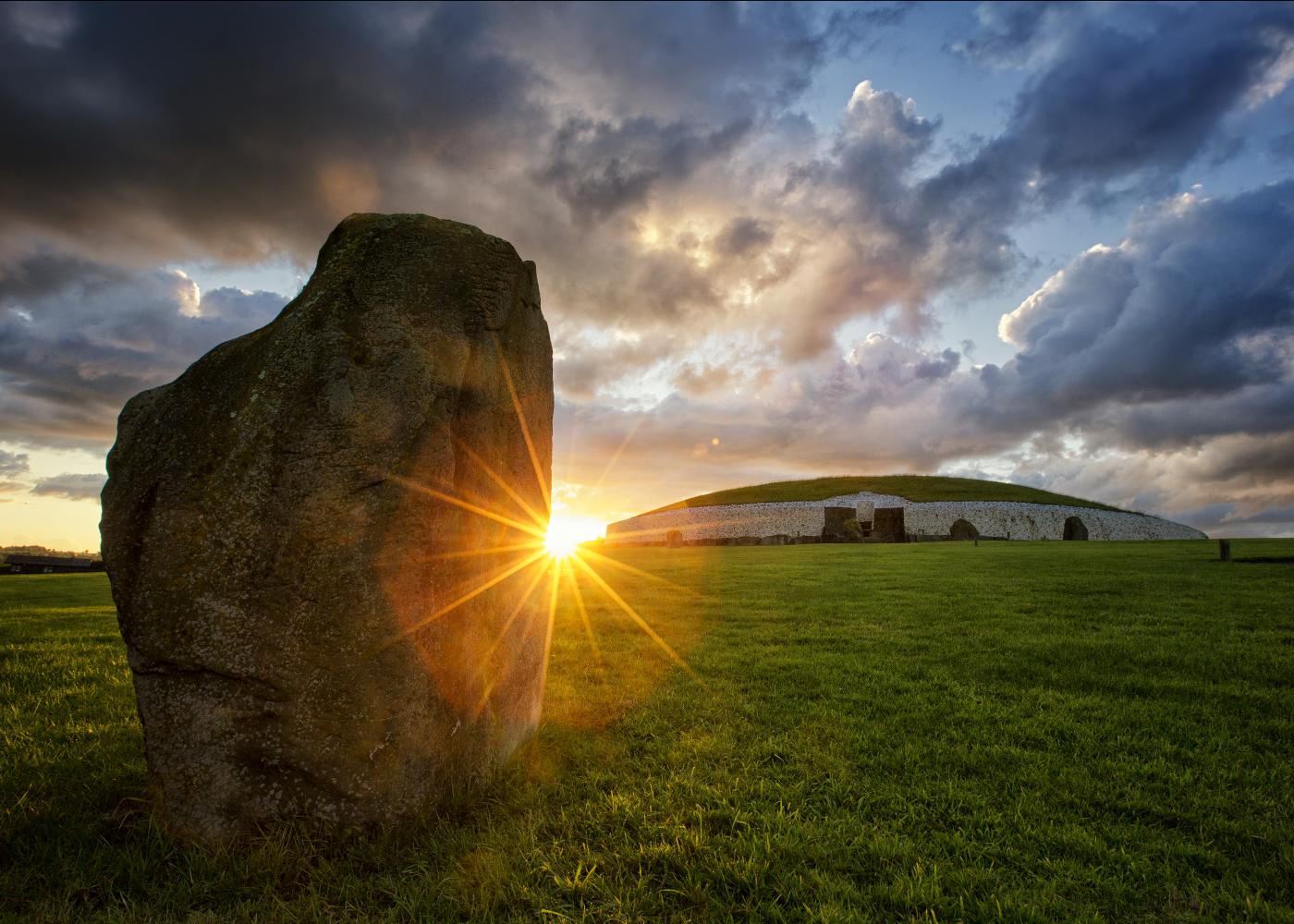 Battle of the Boyne

The Battle of the Boyne between King William III and his father-in-law, King James II, was fought on 1 July 1690 (11 July per our modern calendar). Both kings commanded their armies in person, 36,000 on the Williamite side and 25,000 on the Jacobite side - the largest number of troops ever deployed on an Irish battlefield. At stake were the British throne, French dominance in Europe and power in Ireland. The Battle of the Boyne Visitor Centre is in the recently restored 18th century Oldbridge House, which is on the battle site. Free access to the battle site, parklands and the formal gardens.

Newgrange is a Stone Age monument in the Boyne Valley, County Meath, it is the jewel in the crown of Ireland's Ancient East. Newgrange was constructed about 5,200 years ago (3,200 B.C.) which makes it older than Stonehenge and the Great Pyramids of Giza. Newgrange is a large circular mound 85 meters (93 yards) in diameter and 13.5 meters (15 yards) high with a 19 meter (21 yard) stone passageway and chambers inside. The mound is ringed by 97 large kerbstones, some of which are engraved with symbols called megalithic art.  Newgrange was built by a farming community that prospered on the rich lands of the Boyne Valley. Knowth and Dowth are similar mounds that together with Newgrange have been designated a World Heritage Site by UNESCO.

Knowth and Dowth are examples of Neolithic passage graves and are ancient monuments of the World Heritage Site of Brú na Bóinne located 8.4km west of Drogheda in Ireland's valley of the River Boyne. Knowth is the largest passage grave of the Brú na Bóinne complex and consists of a large mound and 17 smaller satellite tombs. The mound is about 40 feet high and 220 feet in diameter, covering roughly a hectare. It contains two passages placed along an east-west line and is encircled by 127 kerbstones.  The large mound has been estimated to date from between 2500 and 2000 BC.  Knowth contains more than a third of the total number of examples of megalithic art in all of Western Europe

Loughcrew is a magical experience that combines history, beauty, fantasy and atmosphere. Visitors can take a walk through centuries of garden and landscape fantasy. The central area of approximately 2.5 hectares includes a lime avenue, extensive lawns and terraces, magnificent herbaceous border and physic border. Within the gardens stand a medieval mote and St Oliver Plunkett's family church and tower house.

Loughcrew Megalithic Centre is perfectly located within the Boyne Valley and is just a short hike from the 5000-year-old Loughcrew Cairns. Just 45 mins from Dunboyne and a few minutes from the M3 guests can enjoy the Irish countryside while never being too far from civilisation. The Loughcrew cairns is a must see while staying here. A 25-minute hike will take you to these ancient passage tombs and engravings where people from all over the world come to visit. Here over half of Ireland can be seen and the spectacular views speak for themselves.

Causey Farm is a fun based venue for a variety of entertainment, tourism and educational programs. The Murtaghs run a 300-acre farm in County Meath and have opened up their farm to give visitors the opportunity to experience living Irish culture and fun farm activities and provide interactive cultural experiences in a friendly atmosphere for Irish and international groups, as well as fantastic seasonal events for families and individuals.

Slane Castle is a beautiful turreted castle in County Meath, one of the most picturesque and historic buildings in Ireland. The building displays the collective talents of some of Ireland and England’s most distinguished architects, while the extensive parklands were laid out by the distinguished landscape architect, Capability Brown.  Set on the grounds of a 1,500-acre estate through which flows the River Boyne – a few kilometres upstream from the site of the Battle of the Boyne – Slane Castle is the residence of one of Ireland’s most famous aristocrats, Henry Conyngham, Earl of Mount Charles.

Located in the town of Trim, Trim Castle is a stunning Norman castle on the south bank of the River Boyne in Trim, County Meath. The largest Anglo-Norman castle in Ireland, it was constructed in Trim over a thirty-year period by Hugh de Lacy and his son Walter. Hugh de Lacy was granted the liberty of Meath by King Henry II in 1172 in an attempt to curb the expansionist policies of Richard de Clare (Strongbow). Trim, a designated heritage town, is renowned as one of Ireland's most beautiful towns and has something to offer everyone. With Trim Castle on its doorstep, it’s a town well worth visiting and a haven of relaxation and tranquillity.

The Hill of Tara in County Meath is best known as the seat of the High Kings of Ireland but has been an important site since the discovery of a late Stone Age passage tomb. As you explore this history of this landmark attraction, let the magic and mystery of the Stone Ages wash over you.  The Hill of Tara was at the height of its power as a political and religious centre in the early centuries after Christ. Held sacred by people from the Neolithic era, Tara was believed by worshippers to be a dwelling place of the gods and an entrance to the world of eternal joy.

The abbey at Bective was founded in 1147, though much of the remaining ruins date from the 15th century. The abbey sits overlooking the River Boyne, just 15 minutes from Navan in County Meath.  Bective Abbey was Ireland’s second Cistercian abbey, established after the success of nearby Mellifont. It was one of the country’s most important monastic settlements, as its abbot sat in the Parliament of the Pale. Additionally, Hugh De Lacy was buried there before being moved to Dublin.